and Other Popular Urban Myths

“Your fears, worries and false beliefs do not keep you safe. They keep you small.” 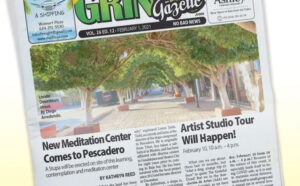 It’s hard to believe when people continue to speak of it as if it were just yesterday, but 2020 marked the 25th anniversary of the kind of thing that tabloids live for; Punta Banda; Mexico’s own Pearl Harbor, “A day which will live in infamy”. The only difference is, Pearl Harbor is remembered factually (for the most part!) where Punta Banda is the result of nothing more than tabloid aggrandizing. And while my father taught me well when he instructed me in the perils of blindly furthering a falsehood by commenting absent first-hand knowledge in the case of Punta Banda, I actually did, “pull up a chair and watch”, albeit through a life-long, personal and long-time attorney friend who was at the table for the deal. And so, should you care to hear the story “straight from the horse’s mouth” so to speak, here it is. Further, for those so-inclined, I’m happy to make a 3rd party article available for download that takes a wholly-objective view of the issue here. Look for it in your “Downloads” file for your convenient access. For me, it’s a wonderful, 10-minute read. I hope you find it as compelling on both sides of the issue as I did.

Back in 1995, a friend from Oakland, California, wholly-unaware that his move would forever change the anonymity he once enjoyed, joined a Mexican law firm which had as it’s client, world-renowned financial institution Bancomer. And, as a favorite of the well-heeled investor community, the financial powerhouse was, at the time, representing local real estate developer, Carlos Teran who had signed a joint venture agreement with an ejido or farming cooperative which purported to have legal possession and thus the right to sell the land to him. 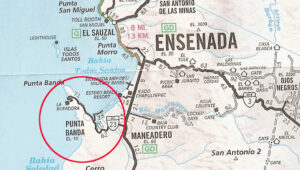 Right about the time that he joined it, the firm was retained to conduct a title search to insure that the trust contract which would underpin Mr. Teran’s  joint venture agreement, would “hold water”; a process which began with research at Mexico’s National Agrarian Registry (Registro Agrario Nacional) or RAN which is the federal agency responsible for recording rights to land under federal control including ejidal, comunidad and colonias land. This agency then is responsible for determining the legitimacy of lands being classified as either ejido land or private or government properties. And it was there at RAN that the whole Punta Banda debacle began its now infamous life when, as we now know after 20-some years of litigation and a 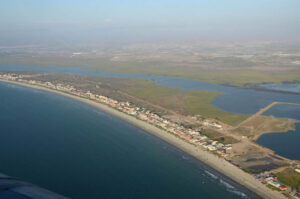 Mexico Supreme Court’s final ruling in favor of the legal owners and against the developer Mr. Teran and more than two hundred investors, many of whom had invested their entire life savings into a development that was supposed to see them through their golden years and then help their children and grandchildren with their financial security, someone there “adjusted” the map, at about the same time that Mr. Teran began his development, to include the Punta Banda peninsula. The result was a wholly-false report of title being issued; an act specifically  designed to defraud the foreign buyer into believing the ejido had the legal right to transfer title and, an act that would not be discovered until some time later after the profits had been “rolling-in” as it were. How this “new” map got there or when it got there will probably never be known, but that which is certain is that, in all actuality, and as such far-removed from the fantasy-world of tabloid journalism that continues to fuel the erroneous urban legend today, the original owner’s rights and boundaries were properly set, platted and filed in 1973 via the then-applicant/owners’ records of ownership which dated back to the 1950s, and as such, the issue of true ownership was well-settled in the 1973 plat; a settlement that, if discovered, would not be favorable to Mr. Teran and his investors.

Now in the United States, our system of checks and balances, our system of insuring titles to property and our even then-current technology, none of which Mexico possessed, would have caught this fraudulent attempt to bypass the system, but in Mexico, it did nothing but allow local, county and state government officials to successfully “turn a blind eye” to Mr. Teran’s development, avoid the time- and money-costly report and permit fees that would normally be required and lay a solid, albeit thin and ultimately failed foundation for developers to lure almost a billion dollars in investment monies from greedy, unrepresented buyers.

So, with the evidence in, the Mexican Supreme Court’s ruling certified and an eye-witness report to the whole incident to consider, what’s the bottom line to the whole Punta Banda incident and the other very few other, similar incidents? For me, simply this; the Government had no hand in taking anyone’s property from them or evicting anyone from their homes except by Supreme Court order. Could they have gone about it in differently? Probably; but they interpreted the Supreme Court’s order of eviction, “within 10-days”, as a legal mandate with no room for interpretation. (see accompanying article)  The developer, the bank and the investigators should have done a whole lot more investigating than they did. The investors should have been more wary of a “too-good-to-be-true” deal and seen it for what it was. And finally, anyone who’s considering investing their “golden years” money into anything, domestically or internationally, needs to secure competent counsel well-before doing so; counsel that won’t stop at, “well the government agency approved it so it must be accurate” and thoroughly research the property and it’s lineage.

When a government agency acts to approve or deny something, anything, it does so with complete impunity as they are legally shielded from the consequences of their actions so long as those actions are taken in good faith. It’s true in the United States and it’s true abroad. They lose NOTHING if they are found to be in error; even when a convening authority delivers an official ruling that the development was found to be in legal compliance (see attached article ) and are subsequently found to be wrong, they bear no adverse repercussions. The investor however loses everything when virtually ANYTHING is found to be in error. It may have taken more than 2-decades; it may have spanned 2-centuries in finding and assigning “responsibility”, but the “smoking gun” was there long before the question was raised and many of the investors ignored a litany of growing concerns and lawsuits that alleged the development’s illegality. And while the 200 or so investors did lose over $900-million in investment capital; and while I personally grieve for these people’s loss, it’s the Mexican economy that is the true casualty in this debacle as even today, a quarter-century later, investors continue to be dissuaded from investment in Mexico purely on speculation, gossip, hyperbole, unfounded allegations and outright fabrications relative to the security of the environment for sound investment. While perhaps unwittingly, many of the investors were inarguably party to the loss by turning a blind-eye to relative the bargain-price of “the deal”, Mexico continues to suffer. Simply stated, if a deal sounds too good to be true, it is; no question about it.