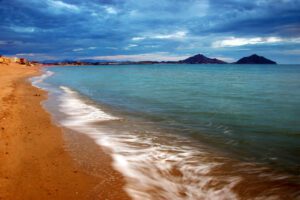 There exists a zone between the beachfront homeowner’s property and the mean high-water mark of the ocean that varies with the tide. Use of this parcel for anything other than the personal, recreational enjoyment of the all beach-goers is by permit or concession only but the homeowner always has priority over others seeking such permit or concession. It is meant as a deterrent to building anywhere on the coastline such that any such construction would deprive the public of their individual and collective rights to enjoy the ocean and beach. It is also an ecological deterrent and works to keep the beaches free of clutter and contamination.

The Mexican Federal Maritime Zone covers the entire coastline of Mexico and extends some 20 meters (60 feet) inland from the high tide-line at any given location and at any given time of day. All forms of construction are strictly forbidden within this zone save for properly permitted industrial or commercial facilities. This prohibition expressly includes structures erected on beach-front homes or lots. A use permit may be granted to the owner of a beachfront property for that portion and only that portion of the Zone adjacent to his/her property. This OPTIONAL permit is granted by SEMARNAT (similar to the United States Environmental Protection Agency) and it is available only for those owners that have lots adjacent to the Zone. If a property owner elects to apply for a Federal Zone Concession permit for their beachfront property, they have priority over someone who may operate a taco cart for instance and elects to apply for a permit.

When there are existing structures that encroach on the Federal Zone or when the property owner wishes to build new structure, a “Concession” must be obtained and there are fairly straightforward legal procedures do so. The granting of a Concession follows a process, is not granted immediately but rather takes several months and, in extraordinary cases, may take years to even consider.

All property that borders the Federal Zone is subject to the Federal Zone Tax which is not the same as the payment for the Concession annual fees but rather a Federal Tax. Typically, this tax is collected by the City because of coordination agreements between the cities of the various states and Mexico’s federal government. An email was recently circulated (Nov/2020) that stated inaccurately that the homeowners also had to apply for an FM3 visa. TheFM3 visa is only needed for certain activities and simply being a homeowner is not necessarily an “activity”. What the owner plans to do with the house and other factors related to income associated with the property determine who needs an FM3 (or FM2) visa.

This current  email also stated erroneously that the named city and SEMARNAT are planning to confiscate those houses or properties who “owe” this Federal Tax. This is also false information.

Mexico is a country where the law prevails and there are civil rights enshrined in the Mexican constitution that protect anyone in Mexico from losing their belongings or possessions without having had the right to defend themselves and their actions in a court of law. Contrary to popular website opinion, Mexico does have Due Process laws. In the case of a tax dispute, property owners must be notified personally so that they can defend themselves. For any authority to enter into a foreclosure (as opposed to a confiscation) related to a tax debt such as Property Tax or Federal Zone Tax, that authority must follow a series of legal processes that assure the constitutional rights of the property owner, give the property owner the opportunity to challenge the validity of the tax and provides ample time and opportunity to pay the tax prior to any civil action or consequence.

If you have any question or concern about tax payments, the local Municipal authorities have always been very cooperative and flexible in creating options that allow property owners to resolve tax situations.

The Federal Maritime Zone is not something to be feared. This far-sighted legislation has been of clear benefit to both Mexican and non-Mexican beachfront property owners and users by insuring that Mexico’s magnificent beaches remain unspoiled and can be enjoyed by everyone. Also contrary to popular belief, no string of vending carts can appear in front of your beachfront house and set up shop without first obtaining the proper permit and even then, they can not materially affect nor prevent your enjoyment of your property and the Federal Zone in front of it. It should be well-noted however that Mexico abhors clocks. They are a society of “laid-back” “mañana” people who believe in “live-and-let-live” and as such see nothing wrong with strolling up and down the beach selling their items. While the proverbial old “Get off of my lawn” may elicit compliance in the US, that attitude would only provide fuel to the fire and soon the one vendito will be replaced with colorful carts from the entire city.

Beachfront homeowners have priority over others in securing Concessions

No one will come to your door demanding money

Mexico is a land of laws where the tourist and investment dollar is welcomed but, as stated, time takes on a different form. If you are approached by someone saying you owe a tax and you are uncertain, a visit to the local authority is in order. However it may be awhile before the custodian of such matters returns.